Sunday’s Hollywood Casino 400 Million dollar weekend crowbar. at Kansas Speedway will be the 10th of 11 races on 1.5-mile tracks and 19th of 20 races using the race package with engines producing 550 horsepower.

This will be the first of three races in the Round 8 and Kevin Harvick comes in as the No. 1 seed and Denny Hamlin comes in as No. 2.

Those two drivers have combined to win 11 of the 18 races using this week’s race package which is why they’re the favorites to win this week. William Hill sportsbooks think Harvick is the overwhelming 5/2 favorite (Bet $100 to win $250) with Hamlin at 4/1 while the Westgate Las Vegas SuperBook posted both as 7/2 co-favorites.

I like the SuperBook’s number better, but I would go a step further and say Hamlin deserves to be the lone favorite because of his current form in his last two races on 1.5s.

He led the most laps at Kansas (57), winning his second straight race there and third overall, and Las Vegas (121) where he finished third after a strange turn of events with a caution while leading that made him restart in the back of the lead lap with 22 laps to go.

Harvick has only one of nine wins this season on a 1.5 (Atlanta, July 7) while Hamlin has two (Homestead, June 14, Kansas, July 23). I fully expect Hamlin to come in with another great car this week, or maybe even the same one. Three-peat at Kansas?

“Our mentality is the same— win and win now,” Hamlin said. “We’ve had success in the last two races at Kansas, and we’ll look to keep that going. I know my team is going to put a fast car on the track and then it’s up to me to get it across the finish line.” 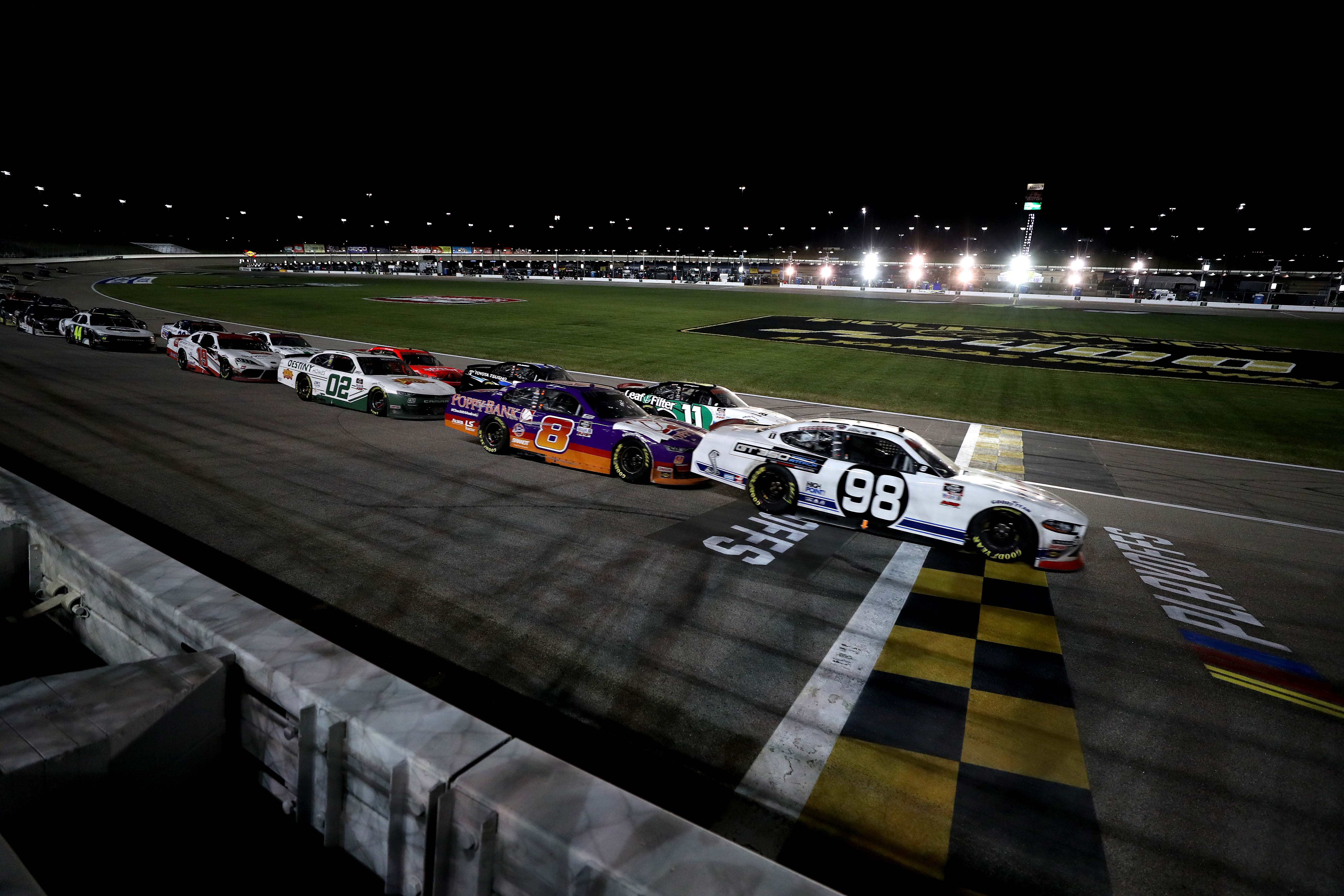 Hamlin has top-fives in four of his last six Kansas starts and eight in 24 starts overall there. And only he and Martin Truex Jr. have had top-fives in each of the last two races on 1.5s.

Now when I suggest that Hamlin should be the favorite it’s not to be any swipe at Kevin Harvick because he owns a few of the track records. He’s tied for the lead with wins (3) and has the most laps led (864). He’s also tied for the most top-fives (9) among active drivers.

“It’s a racetrack where I’ve won a couple races and, for whatever reason, it just kind of fits my style and what we do with the cars,” Harvick said. “We’ve had a lot of good racecars there to capitalize on the good characteristics that fall into my driving style and we’ve been able to have some good results with it.”

Harvick also is tied for the track record with three runner-ups and has led laps in 12 of his last 14 starts. All three of his wins and runner-ups have come within those last 14 races, the last 13 of which have been with Stewart-Haas Racing. His worst finish since being with SHR is 16th in 2015. He was fourth in the July Kansas race.

Kevin Harvick and the No. 4 team have had plenty of success at Kansas Speedway. (AP)

Other Big Names to Watch

Martin Truex Jr. was third in the last Kansas race after leading 44 laps and tied Harvick and Jimmie Johnson as active leaders with nine top-fives. He’s a two-time winner and also has led 803 laps over his 24 Cup starts. The 1.5-mile tracks have been his prime territory and his history at Kansas has inflated his price a little too high at most books that have him in the 4/1 range.

The reality is that his 2020 hasn’t seen any wins on 1.5s, nor has he won on any of the 18 tracks using this week’s race package. His lone win this season came at Martinsville in the 750 hp package.

Brad Keselowski is a two-time winner at Kansas and was runner-up there in July after leading 30 laps. He won using the 550 hp package at Charlotte in May shortly after NASCAR rebooted the season. He was also runner-up at Michigan in August using it. But the sportsbooks have him in the 7/1 range. I like him but, I can’t do much with those odds.

With Harvick, Hamlin, and Truex having such short prices, we should be able to get everyone else at double-digit odds but to stay within their desired theoretic hold percentage of around 23% they’ve offered 10 drivers that have no shot of winning at 5,000/1.

But I do have a couple of drivers I found attractive at odds I can’t complain about, one of them is surprisingly still in the Playoffs and one of them is looking for a 2021 ride.

I’ll start with Alex Bowman because he’s led laps in the last two races on 1.5s finishing fifth at Las Vegas and eighth at Kansas. He was also sixth at Darlington (Sept. 6) and led a lap. His season started so great with a Fontana win and runner-up at Darlington using this week’s race package but didn’t have another top-five using it until Las Vegas. His crew chief Greg Ives has had this race circled for some time.

“I feel like we are going to have a great car in Kansas,” Ives said. “It is one of those tracks that we have had marked on our board, like ‘Hey, this is another place we can win at.’ We have the car capable to do that and we have the team capable of doing that. There are a lot of factors to consider but we are going to go out there with a fast Chevrolet and try to get that win. We have to take advantage of our strengths and we feel that Kansas is one of our strongest tracks when looking at the next three tracks. We have to be aggressive to the point of succeeding, but not over-aggressive.”

William Hill sportsbooks are offering 22/1 for him to win and I do see some value in it because of the upward progression after a poor summer. Bowman gets the automatic bid to be in the Championship 4 at Phoenix with a win.

My favorite bet this week is on Erik Jones at 50/1 odds (William Hill). First off, I like the kid, but let’s face it, he blew a golden opportunity to impress Joe Gibbs by not competing better earlier in the season. But Jones has figured he might as well use the great equipment to help find a 2021 ride and he’s been bringing it strong weekly for the last six weeks: fourth at Darlington, 22nd at Richmond, third at Bristol, eighth at Las Vegas, runner-up at Talladega, and third on the Roval.

It’s probably the most versatile stretch of six races you’ll see and he crushed it. I would certainly hire him with that resume if I needed a driver.

Jones doesn’t have just current form going for him or JGR equipment, he’s got great history at Kansas with finishes of seventh or better in his last five starts, including a fifth-place run there in July. I’ve been chasing a legitimate lottery ticket all season to no avail, but I keep swinging for the fences for one. Jones is my guy this week, as well as Bowman. Hamlin is still my top-rated driver.

For bettors looking at a larger score and more action, they can turn their attention to eNASCAR DFS. To learn more, check out our beginner's guide to eNASCAR daily fantasy sports.